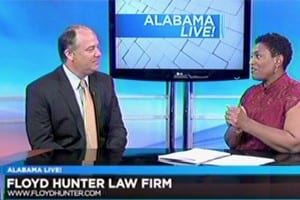 Steps You Can Take To Reduce Distracted Driving in Montgomery, AL

Get a FREE Case Review

Yet, what exactly is distracted driving? Many people will instantly think of their cell phones, which is a major culprit, but this is not the only cause of distraction.

Jeff clarified that the causes of distracted driving are much broader than your phones, making the issue more complex. He explained that “distracted driving is anything that takes your eyes off of the road, whether it be a cell phone, GPS device or talking to passengers.”

Tonya, similar to many people, remarked that she is guilty of all three of these common distractions.

Since so many people drive distracted every day, it may be easy to think that an accident will never happen to you. But it’s important to understand the issue and know the consequences in order to help make a concerted effort to prevent distracted driving.

As almost all drivers have cell phones, it’s easy to fall into a pattern of using them while on the road—even though it is one of the most dangerous places to engage with electronic devices.

Tonya spoke to the underlying issue, which is an addiction of sorts to cell phone usage which has morphed into a normal part of the daily routine.

“We depend so much on those phones, we get in the habit of whenever it rings…to look at it, that we don’t realize that we’re in the car, we’re driving, and that could really lead to some major problems,” Tonya said.

The consequences of distracted driving are serious, as accidents can occur that cause injuries, or even death.

To put the severity of these accidents into perspective, Jeff noted that nearly 9 people are killed every day by distracted driving.

All of these deaths could have been prevented if drivers were not distracted.

To make the message hit home, Jeff referenced a recent, tragic distracted driving accident in Alabaster, which claimed the life of a teenage girl who was texting while driving.

“It’s a serious problem, and really among young people who aren’t experienced drivers,” Jeff said. “They’re the ones who are most susceptible to it.”

Cell phones are a normal part of life for teenagers who are just starting to drive. This reliance on phones, and inexperience on the road can be catalysts for accidents.

Another major part of the issue is that people think that taking their eyes off the road for a second will be fine. This is something people do every day. However, Jeff explained that if you closed your eyes for 5 seconds going 55 mph, you have traveled the length of a football field.

“People don’t realize how much distance they can cover, and something can happen in an instant,” Jeff said.

This statement rings true as accidents happen in a split second that can alter your life forever —all because of something as inconsequential as reading a short text message.

In order to help prevent accidents and tragedies, it’s important for teenagers and adults alike to avoid distractions, such as the ones outlined below.

Most Common Causes of Distracted Driving

Another important takeaway is to give yourself extra time when getting ready.

“Most of the time, those things that you’re doing that distract you, might have something to do with you not having enough time to get wherever you’re going,” Tonya said.

How to Avoid Distracted Driving

Jeff encouraged drivers to make it a habit not to use their phones while driving.  He suggested checking out the setting on your phone that turns them off when you are in the car. That way, you will be less tempted to check your messages and send texts, which will help keep you safer.

If you or a loved one are seriously injured in a distracted driving accident that was not your fault, call the experienced Montgomery Car Accident Attorneys at Floyd Hunter at 334-452-4000.

When you call, you’ll receive a FREE case evaluation by an experienced Alabama car crash injury lawyer. There is never an attorney’s fee due upfront and we don’t get paid until you do. It’s that simple.

Get Your FREE
Case Review