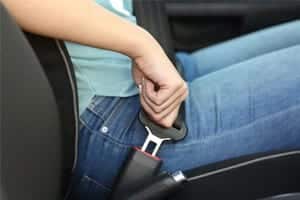 Why Seat Belts Are Important For Anyone Getting Into A Vehicle

Get a FREE Case Review

When you go on a drive, you typically check to make sure you have enough gas in the car, your engine is running correctly and you’re ready to go. But are you guilty of forgetting to do one of the simplest and most critically important actions that can save your life?

Due to these unsettling statistics, Alabama Law Enforcement agencies are urging drivers and passengers alike to buckle up.

You may think that not wearing a seat belt is no big deal. That if you are just going for a short drive, you’re at little risk. Or that if you are involved in a serious accident, buckling up won’t do anything to save you.

But taking two seconds to buckle your seat belt can save your life. Here’s proof.

According to the Centers for Disease Control (CDC), seat belts reduce the risk of death by 45% and the risk of serious injury by 55%. In fact, nearly 15,000 lives were saved in 2016 because drivers and passengers were wearing seat belts.

But what happens if you don’t wear your seat belt?

Why Not Wearing a Seat Belt Can Be a Deadly Decision

Who is Least Likely to Buckle Up?

Did you know that almost 30 million people across the United States do not wear seat belts? Let’s look at a snapshot of those who are least likely to wear a seat belt.

Why Take the Chance? Buckle Up.

As the risk of accidents has increased due to serious distractions such as texting while driving, and with many significant threats on the road, such as drunk drivers, one of the most important things you can do to protect yourself is simple—wear your seat belt.

Even if it’s a short drive, or you think it’s “cooler” not to wear it, there is nothing cool about having a serious or fatal injury from a car accident.

Think about your brother, sister, parents, cousins and friends. How would you feel if they were involved in a serious accident and could have been saved, if only they wore a seat belt? It’s not worth the risk.

Your Local Lawyers Are Here to Help.

If you or a loved one are seriously injured in a car accident that was not your fault, call the experienced Montgomery Car Accident Attorneys at Floyd Hunter at 334-452-4000.

When you call, you’ll receive a FREE case evaluation by an experienced Alabama car accident lawyer. There is never an attorney’s fee due upfront and we don’t get paid until you do. It’s that simple.

Get Your FREE
Case Review