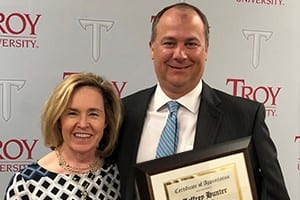 Attorney Jeff Hunter was recently honored for his role as the founder of Troy University’s Order of Omega Chapter, a National Greek Honor Society. The Order of Omega Chapter recognizes Greek members who demonstrate high levels of achievement in leadership, scholarship and involvement in both Greek and campus activities.

In 1993 as a member of Sigma Alpha Epsilon, Jeff spearheaded the efforts to bring the Order of Omega Chapter to Troy University.

Since the founding of the Order of Omega Chapter at Troy University in 1993, the chapter is thriving, and just celebrated the milestone of its 25th anniversary. In honor of the silver anniversary and Jeff’s integral role in founding the chapter, Jeff and his wife attended a banquet ceremony at the Trojan Center Ballroom on April 8.

During the celebratory event, Jeff addressed the room full of more than 150 student leaders. These students embody the mission of The Order of Omega, and have made indelible contributions to the university community, as Jeff has during his time at Troy.

The event offered Jeff the rewarding opportunity to see how much the chapter has grown since its founding and how it has become an important part of Greek life at Troy. Jeff also had the chance to meet with the current students who share the same honorable values of the chapter, and an infectious pride for their university. Jeff said that he “was deeply honored to be recognized by the Troy chapter of Order of Omega” upon accepting a Certificate of Appreciation from the current chapter President. “I am amazed that something I started has grown into a thriving student organization at Troy University.”

This memorable visit back to his alma mater also reunited Jeff with Ms. Barbara Patterson, director of student involvement, whom he worked with to start the Order of Omega Chapter.

Congratulations Jeff on this momentous achievement!

Ms. Barbara Patterson, director of student involvement at Troy University, and Jeff Hunter at the university’s Order of Omega 25th Anniversary Event. Jeff received a Certificate of Appreciation for founding Troy’s Order of Omega Chapter, with Ms. Patterson’s guidance, in 1993.